Nicholas Bittinger was born 11 Jun 1725 in the Strasbourg area of Alsace France/Germany. He was the oldest of four boys. He was 12 when he and his family immigrated to America, arriving in Philadelphia in 1737. 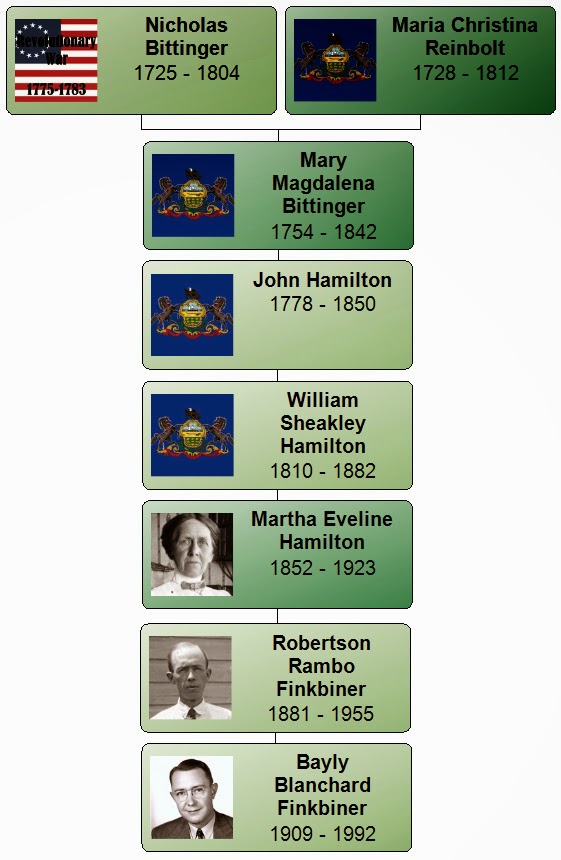 They had 2 sons and 8 daughters:

In 1753 Nicholas B. was elected deacon of St. Michael's church. Ten years after we find him sent to the conference of Lutheran ministers in Philadelphia to plead that a minister be sent to the church; it was impossible to do so, and the conference appointed him to read sermons and
keep the congregation together until better times. He was, as his son-in-law said, 'a terrible Lutheran,' a generous subscriber to St. Michael's, and subsequently to St. John's at Abbottstown.” (1)

Here is one account of Nicholas’ service in the Revolutionary War:

“When, at the outbreak of the Revolution, the Committees of Observation were formed in every county, Nicholas (49) was appointed (for) York Co., December 16, 1774, serving one year.

'He was one of the first that took up arms against the tyranny of the King of England and his ministers,' and raised a company of minutemen at his own expense, being commissioned a Captain, August, 1776, in the third battalion of York Co. These militia were formed into the organization known as the "Flying Camp," were for a time stationed in "the Jerseys," and then made up part of the unfortunate garrison of Fort Washington, who were captured, and many of the prisoners bayoneted by the British, while Washington, viewing from the other side of the river the tragedy he could not prevent, wept 'with the tenderness of a child.'

Nicholas was severely wounded and 'taken prisoner, fighting at the head of his company,' and being sent to the infamous British prisons in New York. After an imprisonment of six months, during which he kept himself from starving by shoemaking, he 'was finally exchanged, thro' the influence of his son-in-law, Maj. Clark, and would have been promoted, but on account of his wounds was retired.' (1)

And here is a second account of Nicholas’ service:

Taken from Peter Foreman's pension deposition:
“That in the spring of 1776 Foreman entered the service of the United States as a volunteer in the Company of Captain Nicholas Bittinger composed of 110 men, all volunteers. Our company went from York County to Amboy - We served as volunteers three months. That when his time was out Foreman enlisted in the flying camp under Captain Nicholas Bittinger for five months -   that his company was taken to Long Island and that he was in the Battle of Long  Island on the 27th of August 1776...


The Battle of Long Island, also known the Battle of Brooklyn Heights, fought on August 27, 1776, was a defeat for the Continental Army under General George Washington and the beginning of a successful campaign that gave the British control of the strategically important city of New York. In the American Revolutionary War it was the first major battle to take place after the United States declared independence on July 4, 1776. In terms of troop size, it was the largest battle of the entire war.  (4)

...and that he was at Fort Washington when it was taken by the British and Hessians in the month of November 1776 --that about thirty-one of our company were taken prisoners but the rest of us (Foreman) made our escape and that not one of those who were taken prisoners of our company ever returned home.” (3) –the last sentence was not quite true, since Nicholas DID return home

“During the American Revolutionary War, Fort Washington was located at the highest point of the island of Manhattan.  Along with Fort Lee, located just across the Hudson River atop the New Jersey Palisades, the twin forts were intended to protect the lower Hudson from British warships.

After the Hessians entered the fort, the American officers attempted to placate the Hessian commander, Captain von Malmburg, who was in charge of the surrender. They invited him into their barracks, and offered him punch, wine, cake, with compliments. As they left the fort, the Hessians stripped the American troops of their baggage and beat some of them. Their officers intervened to prevent further injuries or deaths. The British captured thirty-four cannon, two howitzers, along with many tents, blankets, tools and much ammunition.

The British and Hessians suffered 84 killed and 374 wounded. The Americans lost 59 killed, had 96 wounded casualties, and 2,838 men captured.  Under the usual treatment of prisoners of war in the American Revolutionary War, only 800 survived their captivity to be released 18 months later in a prisoner exchange; nearly three-quarters of the prisoners died. “ (5)


And a third account of Nicholas’ service:
Taken from Henry Baumgartner’s Pension Application: "That Captain Bittinger was taken prisoner at Fort Washington, that Baumgartner with others escaped to Fort Lee, that Baumgartner marched with the detachment of the Army from Fort Lee through New Jersey to Trenton, crossed the Delaware and at the end of Baumgartner's term of six months was discharged." (6)

“Meanwhile Nicholas’ wife Christina was also serving and suffering for her country, for she had 'great trouble when her husband was away in the army, with a large family of children and unmanageable slaves to take care of, always in terror of the British and Indians.'

Nicholas resided for the rest of his life on his farm near Abbottstown, where he lived in considerable style, educated his children and was a man of great wealth and influence in his day. It is said that his daughters were the only persons who at that time wore silks; he had the first and only gig (a light, two-wheeled carriage drawn by one horse) in that neighborhood.

The family was nicknamed 'der Adel' (the nobility) in the country-side. 'He was a prodigious Whig,' (an American colonist who supported the American Revolution) says Samuel Lane, 'as were they all.' In person he was tall but spare, and 'a very unfashionable man.' He had a large amount of property, owning '1,000 acres in Franklin Co., two mills in Adams Co., with 300 acres to each mill, besides a great deal of other property.' " (1)

"He died from the consequences of his imprisonment, leaving a "widow, two sons and seven daughters to mourn the loss of an affectionate husband and father.' 'I have always heard him spoken of with pride and reverence,' writes a great-granddaughter.” (1)

(a)This is a painting of Capt J. Nicholas Bittinger taken from a website that advertises restoration of paintings. I do not own this painting, nor do I know who owns it or where it is. If you know, please tell me as I am curious to see it. Added by: texmexfla 3/28/2007   http://www.findagrave.com/cgi-bin/fg.cgi?page=pv&GRid=14673341&PIpi=5621767
(b) "BattleofLongisland" by Domenick D'Andrea - [1][2]. Licensed under Public Domain via Wikimedia Commons - http://commons.wikimedia.org/wiki/File:BattleofLongisland.jpg#mediaviewer/File:BattleofLongisland.jpg
(c) "Forcing a Passage of the Hudson" by Dominic Serres - NMM BHC0420. Licensed under Public Domain via Wikimedia Commons - http://commons.wikimedia.org/wiki/File:Forcing_a_Passage_of_the_Hudson.jpg#mediaviewer/File:Forcing_a_Passage_of_the_Hudson.jpg
(d) "View of the Attack Against Fort Washington crop" by Thomas Davies - This image is available from the New York Public Library's Digital Library under the digital ID 54209 Licensed under Public Domain via Wikimedia Commons - http://commons.wikimedia.org/wiki/File:View_of_the_Attack_Against_Fort_Washington_crop.jpg#mediaviewer/File:View_of_the_Attack_Against_Fort_Washington_crop.jpg
(e) This memorial marks the site of Fort Washington. Constructed by the continental troops in the summer of 1776 Taken by the British after a heroic defense November 16, 1776 Repossessed by the Americans upon their triumphal entry into the city of New York November 25, 1783.
Erected through the generosity of James Gordon Bennett by the Empire State Society of the Sons of the American Revolution November 16, 1901 This file is licensed under the Creative Commons Attribution-Share Alike 3.0 Unported license.
(f) American Heritage® Dictionary of the English Language, Fifth Edition. S.v. "." Retrieved February 16 2015 from  http://www.thefreedictionary.com/_/viewer.aspx?path=hm&name=A5gig-1&url=http%3A%2F%2Fwww.thefreedictionary.com%2Fgig
Labels: Bayly's Ancestors Immigrant POW Revolutionary War Slave Owner