Again, this is the research work of Warren Skidmore in 1980.  Here is a synopsis:

As adults, two of his older brothers went to Kent County Delaware, and Joseph Sr. joined them there.

Joseph Sr married Rebecca Miller of Kent County, Delaware in about 1702, and they had two children.

Joseph Sr (age 34) died in Murderkill Hundred, Kent County, Delaware before 12 May 1708.  In his will, Joseph Sr left his entire estate to his wife Rebecca.  His daughter Susanna was to have a yearling colt and his son Joseph was to have “the 92 acres of land that I dwell on.”

Murderkill Hundred = A”hundred” is smaller than a county, each with 100 households.  Kill (Dutch) means creek.  It got its name after the local Indians attacked and killed the members of a Dutch settlement in 1648.

Joseph Skidmore was born about 1706, the son of Joseph Sr (above, who died when Joseph was 2 years old) and Rebecca.

Joseph (age 24) married Annes Caldwell in about 7 April 1730.  Her father was one of the most influential men in Kent County, Delaware and her brother Andrew was in the General Assembly of Delaware from 1745 to 1757.   They had 11 children, born between 1730 and 1750.  Our ancestor is their second child, James.

On 18 June 1736, Joseph, yeoman, (a commoner who cultivates his own land), sold Fisher’s Delight (inherited from his father) for £70 and moved to Maryland.

On 11 June 1748, Joseph (age 42) bought a tract of 50 acres called Monican in Maryland for £50, but only lived there briefly.
Joseph took his family south into Virginia passing through the gap at Harper’s Ferry. They “camped” for a time while Joseph and his older sons crossed the Alleghenies looking for land.  There is a place at the mouth of the North River called to this day Skidmore’s Fork.

By 1753 they had crossed the mountains and settled permanently in Augusta County, VA what would become Pendleton County, West VA. Beginning on 7 Oct 1754, many land surveys were recorded by Joseph Skidmore. It defined the boundaries of 180 acres on Friend’s Run near the present county seat of Franklin.  He entered small tracts that promised some easy development.  After the French and Indian War when settlers came flocking, he had a fine selection of the very best land to sell them.

Joseph Skidmore had scarcely gained a footing in Virginia before the whole of the frontier was bathed in blood. 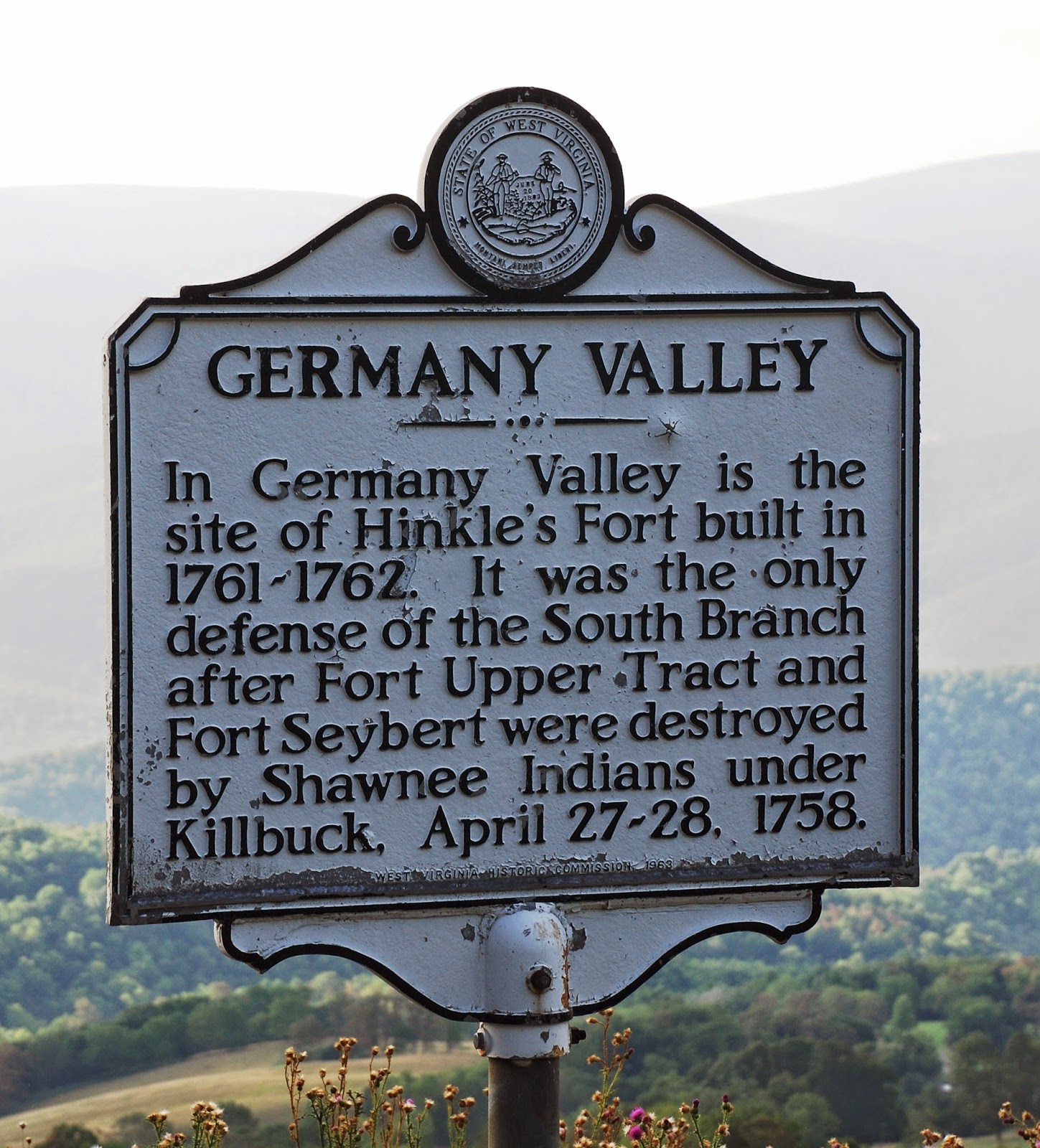 At the time the Skidmores settled near Ruddle, West Virginia, no Indians lived in the immediate area and those who passed through on hunting expeditions were friendly.  However, the French soon after supplied them with arms and induced them to attack the English.  With tensions rising, two English forts had been built to defend the 200 or so families who lived in Pendleton County.

On 27 April 1758, a Shawnee raiding party of about 40 braves captured and burned Fort Upper Tract (about five miles from the Skidmore settlement at Ruddle) killing 22 people.  The next day they attacked Fort Seybert where they killed 17 of the white settlers and took 11 prisoners.

Many of the surviving families fled. In the summer of 1758 a number of wills, inventories, and sale bills were recorded at Staunton for those who perished in the forts.  The Skidmores figure in many of these instruments settling up the estates of their former neighbors.

We have ample evidence that the Skidmores stayed despite the perils.  On 14 September 1758, the Assembly at Williamsburg voted to pay for the public expense of the war and Joseph Skidmore (age 52) is listed as being due £1, 7sh.  The accounts also list his three oldest sons, Joseph, James and John Skidmore, who were entitled payments for their service in the Augusta County Militia during the French and Indian War.

Joseph's home was near the present crossroads at Ruddle where he built a mill on Skidmore’s Mill Run.  His original house has since been enlarged and sided over on the outside.  The original burr stone from his mill was used many years ago as a foundation for a chimney added to the house.  It was still there as of 1977.

The Skidmores did most of their trading at a store kept by Felix Gilbert at Peale’s Crossroads.  His account books survive for the years 1774-1777.

Joseph (age 72) died before 17 March 1778 at Ruddle, West Virginia. His will was dated some three years earlier, “being overtaken with the infirmities of age and weak of body.“  The estate totaled nearly £550, including slaves.  (I was so disappointed to find out that we had ancestors who owned slaves.  When you go looking into the past, you never know what you might find, and I think it's important to share both the good and the bad aspects of our family's history.)

Annes Skidmore survived her husband by many years at least until Jan 1792 when she would have been about 80 years old.