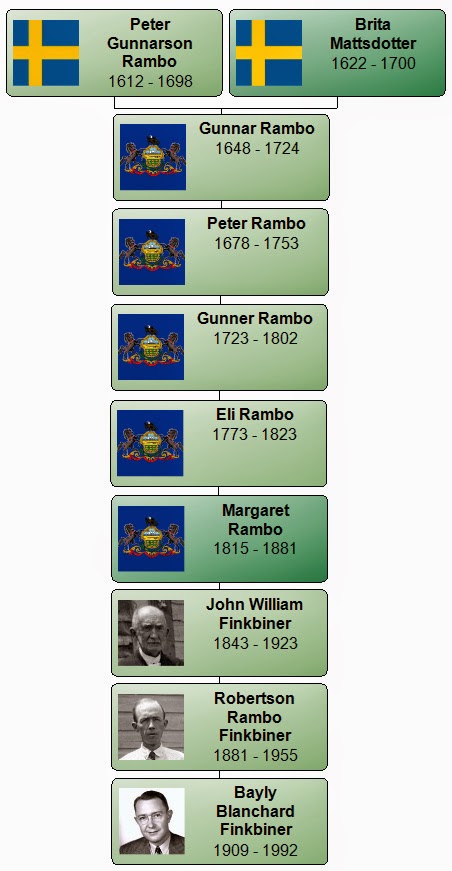 "A careful search of available records has turned up only one Rambo who came to America, Peter Gunnarson Rambo.  For the next two hundred years, all other Rambos born in the New World were his descendants.

Peter Gunnarson Rambo was born about 1 Jun 1612 in Hisingen, an island formed by the G”ta River and now part of the city of Gothenburg, Sweden.  There is a hill in Hisingen called Ramberget (Raven's Mountain) with a panoramic view of the city and harbor of Gothenburg.
The literal meaning of Rambo was "home of the raven".

The patronymic system of names was used in Scandinavian countries from early times.  Children received a first name, and a second name was derived from the name of the father.  Therefore Peter Gunnarson was Peter, the son of Gunnar. (Brita Mattsdotter was Brita, the daughter of Matts)  Indeed, records have been found indicating that part of Peter Gunnarson Rambo's wages in 1643 and 1644 were sent home to his father, Gunnar Petersson.  Since there may have been several Gunnars in a community, it became customary to add the name of the place to designate a specific person, such as Peter Gunnarson of Ramberget. (Rambo)


Peter Gunnarson Rambo was an unmarried man of twenty eight when he signed on with the New Sweden Company to go to America as a colonist.  In September of 1639, he sailed on the "Kalmar Nyckel," but twice the ship sprang leaks and had to turn back for repairs.  Storms during December further delayed their departure, but they finally embarked on their journey across the Atlantic on 7 Feb 1640.

The journey was far from pleasant for the Swedish colonists.  The Dutch master of the ship spent his time smoking and drinking with the Company factor.  They showed their dislike of the Swedes by scolding and cursing them.  However, the ship safely reached port in New Sweden on 17 Apr 1640 at Fort Christina on the shores of the Delaware River near Wilmington, Delaware.

Peter Rambo's own recollection was that the ship reached New Sweden on 10 Mar 1640.  The date of his arrival is confirmed by a roll list of 1648 that showed he arrived on the Kalmar Nyckel in 1640.

Additional evidence is obtained from the 1693 church census that listed the persons who were born in Sweden.  Opposite the names of "Pet. Rambo" were words stating they had been in America for 54 years.

Upon arriving in New Sweden, Peter Rambo lived at Christina, near the fort, and was employed as a farm hand at ten guilders per month.  In 1643 and 1644 he sent part of his wages home to his father Gunnar Petersson in Gothenburg.  The roll list of the colony by Governor Johan Printz dated 1644 named "Perr Gunnarsson Rambo" as cultivating tobacco for the Swedish West Indies Company on the plantation at Christina.

On 1 Nov 1644 Peter Rambo became a freeman and settled on a plantation near Cobbs Creek in Kingsessing, located in present day West Philadelphia.

'There were two men named Matts Hansson in New Sweden; both were single men when they arrived.  Brita could not be the daughter of either of them.  No other candidate named Matts appears. Thus, she either arrived in the family of a stepfather or came as a maidservant.  I think the latter is most likely.  It is quite possible, I believe, that Brita Mattsdotter was the unnamed servant girl who came to New Sweden in 1641 with Lieutenant Mons Nilsson Kling and his wife and child.  Kling was commander of the Swedish fort on the Schuylkill at the time when Peter Rambo and Brita Mattsdotter were married.  Kling returned to Sweden with his family in 1648.  Kling has been described as a 'Swedish Finn,' meaning that he was an ethnic Swede who resided in Finland when he came to America.  Brita came from Vasa in Finland and was also probably an ethnic Swede.'

Heavy rains in 1652 damaged many of the crops, but evidently Peter Rambo had some surplus grain as he was charged by Gov. Printz for illegally selling grain to the Dutch.

On 7 Sep 1655 he was a member of the group of Swedes who met with Dutch Governor Peter Stuyvesant.  On the 16th of September, he was present at a Council meeting where the colony passed from Swedish to Dutch rule and in 1656 Governor Stuyvesant granted them a measure of self rule.

He was elected a magistrate of the court in 1656.  In 1660 and again in March of 1661, Peter Rambo petitioned Gov. Stuyvesant to be discharged as a magistrate, claiming he "has to take care of a very large family and therefore cannot well, unless to his great disadvantage, spare the time to attend to the aforesaid office."  His resignation was accepted, but he was again appointed justice on the Delaware River by Gov. Lovelace in 1664.

By 1669 Peter Gunnarson Rambo moved to Passyunk on the east side of the Schuylkill River opposite Aronameck.  The patent for this 300 acres of land was dated 1 Oct 1669.

Historical records show that some court sessions were held at Peter Rambo's house in 1675, that he was repaid for entertaining the governor and other high ranking officials in 1676, and heard criminal cases of murder in 1670 and 1672.

Until modern times his plantation was the site of a large landmark known as "Rambo's Rock."  In 1684, census taker John Cock estimated that "Peter Rambo has 600 acres of land whereof he has improved 16 acres.


Most legal and governmental affairs of the settlement were handled by the magistrates of the court. Only one court existed in what is now Pennsylvania until the arrival of William Penn.  Peter Gunnarson Rambo served on the court under Swedish, Dutch, and English rule for 29 years.

The Rambo family was well-known by William Penn who referred to them in his correspondence in 1684 and later.  When Delaware County was bought from the Indians by Penn in 1684, the sale was witnessed by Peter Rambo.  Penn wrote from London to Thomas Lloyd on 16 Jan 1685, "Salute me to the Swedes, Captain Cock, old Peter Cock and Rambo and their sons, and the rest of them."

In 1684 Peter Rambo gave testimony about Dutch settlements established before 1632 along the Delaware River to refute Lord Baltimore's claim to the territory for the state of Maryland.  At this time, 25 May 1684, Peter claimed to be 72 years of age, confirming his birth date of 1612.  In one deposition of "Certain Ancient Sweeds Living on the West side of Delaware," Peter Rambo, Peter Cock, and Hance Monson gave testimony regarding the establishment of New Sweden and the purchase of land:


'In the year 1640, 10th March one of the above said shipps returned with Peter Holland, Peter Rambo, Andrees Bown & severall other Sweeds, who bought Land from an Indian king Named Kekesikkun' " (1)