“Mary Wright Stebbins Greenlee was born 13 Sept 1808 near Wilbraham, Massachusetts about 8 miles from Springfield. Here she lived with her parents until 1811 when they moved to Sangerfield, New York where her father died in 1813. After his death they moved to Lebanon, New York and later to Crawford County, Pennsylvania.

Her half-brother, Daniel Stebbins came to Crawford County first, then her brother Lemuel Stebbins followed with their mother and the rest of the family. The household goods were brought in an ox-cart, the family traveling most of the way on foot.” (1)

Mary (24) married Edmund Greenlee (21) on 10 April 1832.  They had 8 children, two of whom died as infants.  Their twin boys wrote the Greenlee Genealogy and in it, their tribute to their mother continues:  (this is the same "log rolling, buckhorn wrestling wife" mentioned in last week's post) 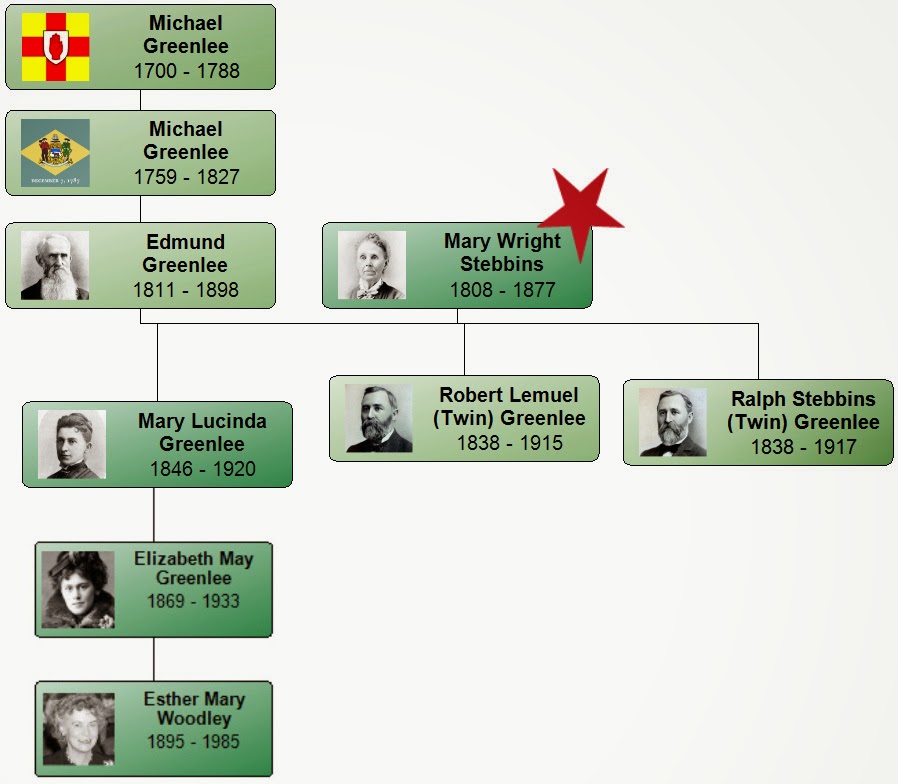 “She made the most of her opportunities for obtaining an education and fitted herself to become a teacher. She taught several terms before she met and married Edmund Greeley receiving wheat, corn and rye in payment for her services. 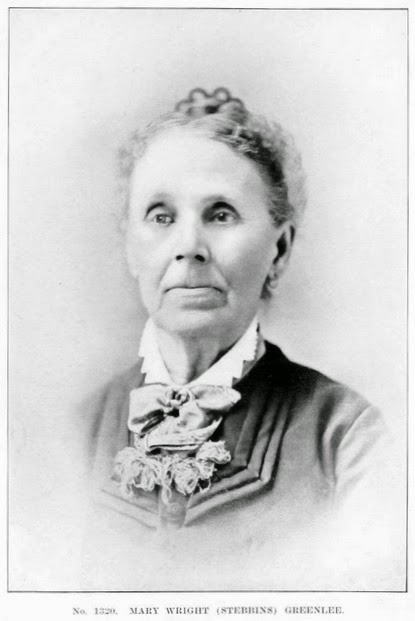 At that early day farmer’s wives were obliged to make the clothing of both men and women. Mrs. Greenlee was an expert at spinning and weaving. She carded and spun wool and flax and wove the same into cloth for family use. It is said that she learned to spin when so small that it was necessary for her to walk up and down an inclined board in order to reach the spindle wheel; yet in that way she was able to spin what was considered a full day’s work and finish at 3 o'clock.

She was a model housekeeper, a woman of untiring energy, but did her work intelligently and made every step count. Whenever she had occasion to go into the pantry for anything she always remembered to take in something to put away, thus saving time and labor. It was her practice in early life on wash days to scrub the floor first, so that when the washing was done the house would be clean.


Mrs. Greenlee had a keen sense of right and wrong and was very zealous in the care and training of her children. She possessed a decided taste for reading and had a remarkable memory. She knew the Bible almost by heart, and could instantly tell where to find any passage in it that was quoted and rarely made a mistake.


She was a woman of strong character, a true helpmate to her husband and an exemplary mother. She died 9 July 1877 while on a visit to her sons in Chicago and was buried in Rose Hill Cemetery. (1)