This is the research work of Warren Vincent Sprague in 1913.  Here is a synopsis:

"Frederick Sprague was born 17 Oct 1762 in Sackville, Nova Scotia, the 10th child of 16. (His family was American and they were only in Canada briefly.)

Frederick Sprague (age 16) enlisted at New Milford, CT as a private, and served from March to December 1779, under Captain Doan and Colonel Meigs, in the Connecticut line in the Revolutionary War.

He enlisted again  18 July 1781, and served 3 months, 21 days as a private under Captain Clark and Colonel Willett in the service up the Mohawk River.  He fought in two major battles:"

"The Battle of Stony Point took place on July 16, 1779. In a well planned and executed nighttime attack, a highly trained select group of (American) troops under the command of General "Mad Anthony" Wayne defeated British troops in a quick and daring assault on their outpost in Stony Point, New York. The British suffered heavy losses in a battle that served as a huge victory in terms of morale for the Continental Army. While the fort was ordered evacuated quickly after the battle by General Washington, this key crossing site was used later in the war by units of the Continental Army to cross the Hudson River on their way to victory over the British."** 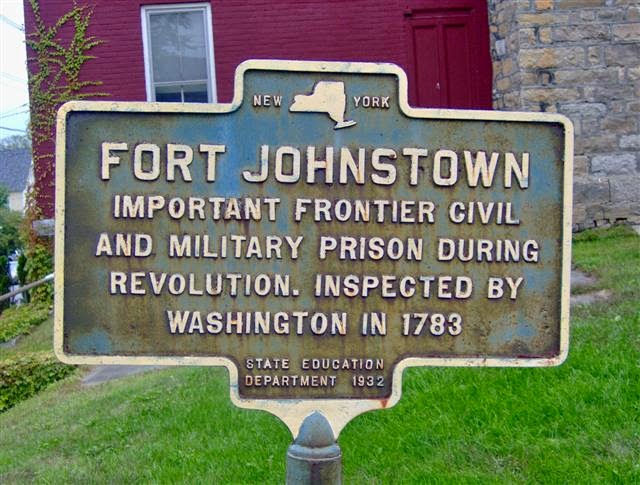 "The battle at Johnstown took place 25 Oct 1781. Entering from Canada, a force made up of British regulars, loyalists, and Mohawk warriors entered the Mohawk Valley, several hundred strong.

The raiding party approached the village of Johnstown.  The Americans were outnumbered, but divided their forces and sent a small group of men around the enemy flank to attack them from the rear. There followed an intense fight.

For unknown reasons, the militia on Col. Willett's (Americans) right flank suddenly turned and fled in a panic, and Willett tried to halt the retreat and turn his men. Col Willett was saved by the arrival of his flanking force, which arrived and attacked the British rear. The British were defeated. These were among the final material conflicts of the war in North America."*

"After the war, in about 1782, Frederick married Rebecca Nichols.  She was born 9 Jan 1766 in Newport RI . She was the daughter of Captain John and Catherine (Sabin) Nichols.

Rebecca and her twin brother John (children #6 and #7) were baptized 20 Oct 1766 at the Congregational Church in Newport.  Their parents were married there 23 Dec 1750. John Nichols Sr was a sea captain.  He was once shipwrecked on the Hudson and was away three years; when he came home he was not recognized at once by his wife and family on account of the full beard he had grown.  Later, in Sept 1768, when he was 40 years old, John’s vessel went down at sea and he was drowned.  His family afterwards removed to Connecticut.  They were staunch Church of England people."


"Frederick and his family settled in Genesee County, NY, but 'as times were very hard and Canada offered a free homestead to settlers, he with others formed a small colony, emigrated to Lake Simcoe, Ontario, and commenced building a home in that wilderness, never dreaming that there would ever again be war with England.'

At one time during the war, Mrs. Sprague with her daughters Catherine and Mary were on Roach's Point, picking blackberries, when they noticed on the lake some Indians rowing towards them. They soon landed and with whoops ran after them, one Indian slashing the bushes with his long knife. This was great fun for the Indians, for they merely meant to scare them. After Mrs. Sprague and her children reached home the Indians came to the house and handed Mr. Sprague their guns in token of peace. After they left they killed one of the oxen and escaped with the quarters.


After the war was over, in 1816, Frederick sold his claims and moved to New York State. On May 6, 1818, he applied for a pension for his military service, which was granted him. In 1818, he decided to join his brothers in Ohio. Frederick and his family and others crossed Lake Chautauqua in a boat and floated down the Alleghany and Ohio rivers to Marietta, Ohio and thence up the Muskingum River to Coal Run, Ohio where they located. The voyage consumed eight weeks.

Frederick Sprague and family settled on a farm of 218 acres, which he had previously purchased from his brother Jonathan for four dollars per acre, to be paid for in eight years without interest. Frederick and his wife Rebecca were Missionary Baptists. (In 1788, he had been admitted to the Baptist Church at Cheshire, MA.) 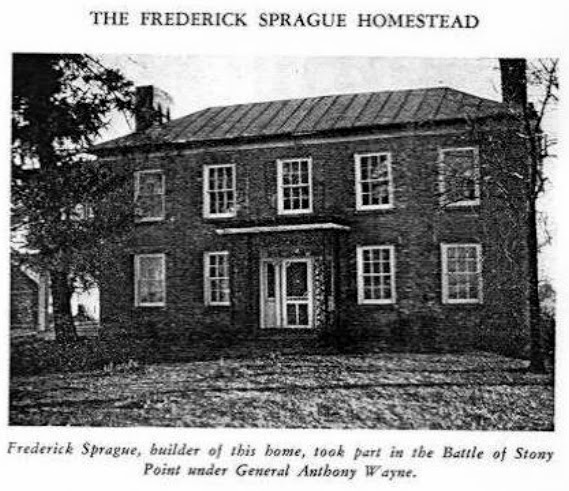 Frederick Sprague urged his children to secure as much education as the times afforded in those pioneer settlements. (his son Sidney, our ancestor, was an attorney). He also paid the tuition of poor children that could not otherwise have obtained an education.

(The above history is largely from oral statements made by Frederick's daughter Mary Mariah Sprague (b 1808) to the compiler in 1899 and 1900)."