This is the research work of Warren Vincent Sprague in 1913 (with some embellishments).  Here is a synopsis:

Joshua Sprague was born on July 3, 1729 in Smithfield, Rhode Island. The youngest of six children. He married Amey Darling on 2 Jan 1748 and they had a daughter in May 1749. Sadly, Amey (age 20) died in childbirth. Joshua married again to Abigail Wilbur on 22 Apr 1750, and they had 12 children. The 8th child was Frederick, our ancestor.
Soon after his first marriage his father William deeded him "300 acres of land in Smithfield, a dwelling house and half a barn.”

In June, 1762, after having disposed of his farm, he with his wife and 7 children followed the tide of emigration into Nova Scotia for the purpose of occupying land left by the luckless Acadians. The Acadians were the descendants of the original French settlers in Nova Scotia. Eventually, after the French and Indian War, the British deported the Acadians from the region. Some migrated to Louisiana, where they became known as Cajuns, a corruption of the word Acadians.

The Sprague family took up a homestead of several hundred acres at the town of Sackville, Nova Scotia and resided here for about fourteen years, during which time six more children were born.

At the opening of the Revolutionary War, the British in Canada deported Americans (those that were sympathetic with the American cause). The Spragues were forced to leave, losing all their possessions. They settled in Adams, Mass.

Joshua was enthusiastic in the cause of freedom, as were his sons. Joshua (age 47) enlisted four times for service in the Revolutionary War:

On the afternoon of August 16, the weather cleared, and American General Stark ordered his men to be ready to attack. Stark is reputed to have rallied his troops by saying, ‘There are your enemies, the Red Coats, and the Tories. They are ours, or this night Molly Stark sleeps a widow.’ The Germans, most of whom spoke no English, had been told that soldiers with bits of white paper in their hat were Loyalists, and should not be fired on; Stark's men had also heard this and many of them had suitably adorned their hats.

When the fighting broke out around 3:00 PM the German position was immediately surrounded by gunfire, which Stark described as "the hottest engagement I have ever witnessed, resembling a continual clap of thunder."

Total German and British losses at Bennington were recorded at 207 dead and 700 captured; American losses included 30 Americans dead and 40 wounded.

After the war Joshua worked at the carpenter trade, building boats. In 1788, Joshua (age 59) and his two older sons left Massachusetts, heading west and arrived at Marietta, Ohio, June 22, 1788. The three men took a contract of building one of the block-houses for which they received one hundred dollars.

Joshua went home to Mass. and the next spring returned with his family along with twenty other families.  In April 1789, the Sprague family went with the association that settled Waterford, on the Muskingum River. They helped build the block-houses and Fort Frye stockade which was a defensive fortification, following the massacre at Big Bottom and the start of the Northwest Indian War. They lived in the stockade seven years, or until the Indian troubles were over.


"For the losses sustained by these refugees from Nova Scotia, and for the services some of them rendered the United Colonies in the Revolutionary War, Congress passed a resolution, that 'whensoever Congress can consistently reward them by grants of land they will do so.' "

Joshua Sprague is mentioned as entitled to a land award, and on 12 July 1812, he was granted 650 acres in Franklin County, Ohio.

He always regretted that he went from Rhode Island to Canada. He said that he had a peck of silver dollars when he moved to Nova Scotia. 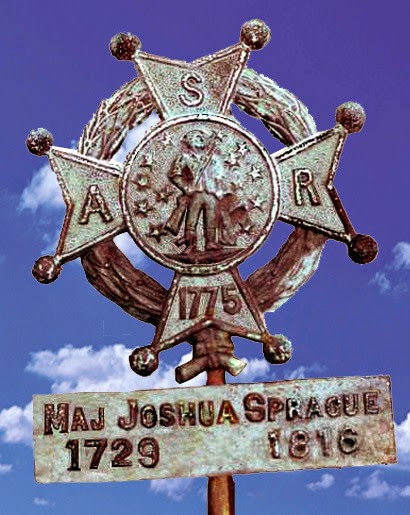