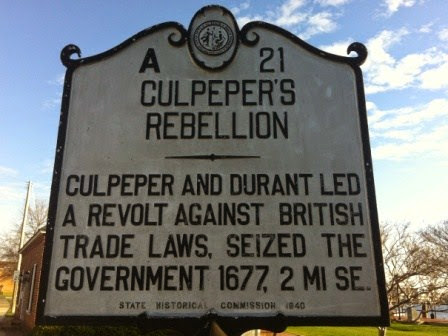 “George Durant's home was now the unofficial seat of government.

After learning that Thomas Miller was still imprisoned, several men who were loyal to the British government, helped him to escape. Miller headed immediately back to England. 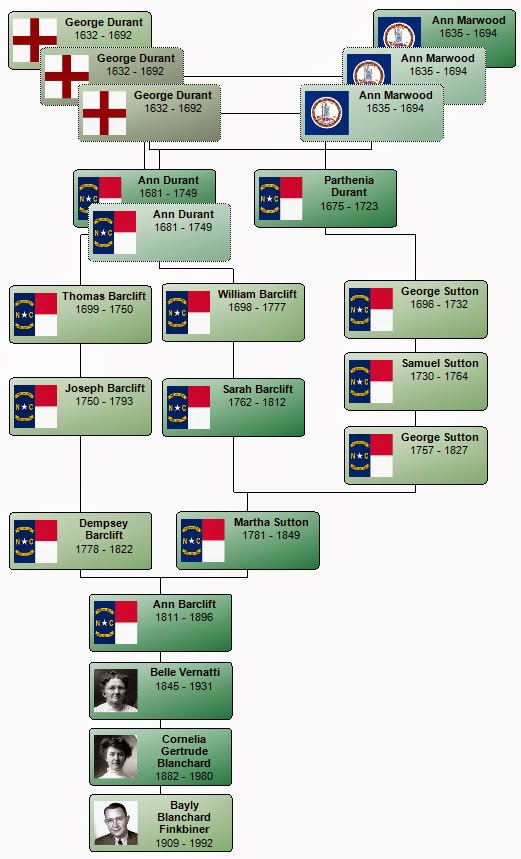 Thomas Miller arrived in London, penniless, sick and bitter. Miller quickly gave additional evidence to the Commissioners of Customs. He charged that, besides the tobacco confiscated by the rebels, that they had also stolen some of His Majesty's customs receipts and fines amounting to 1,242 Pounds Sterling.

Both Culpeper and Gilliam were charged as "being two of the Principal Contrivers and Promoters of the said Rebellion." On 31 Jan 1680, depositions were taken and Culpeper was found guilty of "Treason in abetting and encouraging a Rebellion in Carolina."

The following day the prisoner was committed to Newgate Prison. Zachariah Gilliam was called before the Lords of Trade and Plantations a week later. He skillfully defended himself as an innocent ship's captain, caught up in events of which he had nothing to do. As there was no direct evidence against him, he was allowed to go free and promptly sailed away.

John Culpeper's treason case dragged on and on until 20 Nov 1680, when the trial finally began.

Representing the British government and the ‘Lord Proprietors’ during the trial was Lord Shaftesbury, the Earl of Craven. Lord Shaftesbury's devotion to his "darling Carolina" was well-known and he surprised everyone by siding with the accused!

Apparently, he was aware that, should Culpeper be found guilty, the Carolina charter could easily be revoked. The Lords Proprietors were taking no chance of losing their favorite cash cow. Shaftesbury argued that John Culpeper, George Durant, and the others rebelled only due to Thomas Miller's loose tongue, his threats, and his fanatical zeal in governmental operations.

Culpeper's claim that his authority was derived from the Assembly of the people, said the Proprietor, was not without basis. Under their constitution, the people of Carolina had been granted the privilege of electing delegates to the legislature every two years.

Therefore, Carolina’s "pretended Parliament" was in itself a legal body! The verdict was acquittal for John Culpeper. The Proprietors gave assurances that restitution would be made for the confiscated customs, which was done by the Carolinians.

After several years, the uprising finally drew to a close. The Culpeper Rebellion lasted from 1677-1680 and Durant's estate had been a frequent meeting place for insurgents, as well as a jail for political prisoners.

An Act of Oblivion granted pardons to the rebels and in 1681 the Proprietors relaxed their claims on all products of the whaling industry for seven years, in order to allow the inhabitants to steady their fortunes.

John Jenkins was eventually recognized as governor and George Durant became attorney general in 1679. He also served as speaker of the Assembly. However, some of his contemporaries claimed that "though Jenkins held the title, yet in fact, Durant governed and used Jenkins as his property."

The Culpeper Rebellion received its name due to John Culpeper's trial in London. Yet it was George Durant who initially determined that Culpeper should go to London and it was Durant that first encouraged the arrest of Thomas Miller and others.

Until his death, Durant continued to influence the colony and did not hesitate to punish his enemies - particularly the Old Neck Quakers who had supported the British Government during the rebellion.

Durant's will was probated on February 6, 1694, some thirty-five years after his first arrival in Carolina.

At the University of North Carolina in Chapel Hill, George Durant's Bible - printed in London, England in 1599 - is displayed in a locked cabinet. He brought this Bible with him when he came to the New World. It is one of the oldest English Bibles in the United States.” (1)