52 Ancestors: Week 16: John B Lewis in the Civil War: deserted, arrested, captured at Spring Hill, dead in a fiery explosion!

I got his service file from the National Archives… and it’s a good story.

John B Lewis was born in Indiana, got married to Mary Sprague, and had a little girl named Ida May.


Then on March 1, 1862, he volunteered and joined the Union Army.  He was assigned to the 9th Indiana Infantry in Company K for a three year term.  The Regiment shipped out and arrived in Nashville one week later.


And a week after that, John was sick in the hospital.  (He had passed his physical just two weeks prior.) He was granted a 5 month discharge furlough on March 27, 1862 and he headed back home. While John was gone, his unit fought in the Battle of Shiloh, a major battle of April 6-7, 1862. When August 18 came around, he should have returned to duty.  But for some reason he did not.  Ida May was not yet one year old.  John stayed home (for over a year), presumably farming, and supporting his young family.  But it was a short lived respite.

13 months and 13 days (October 3, 1863) after John was supposed to report back to his unit, he was arrested, and returned by the Army to join up with his unit in Tennessee.

His unit saw a lot of action in the Civil War.  They were part of the Union Army’s IV Corps, First Division, 3rd Brigade. 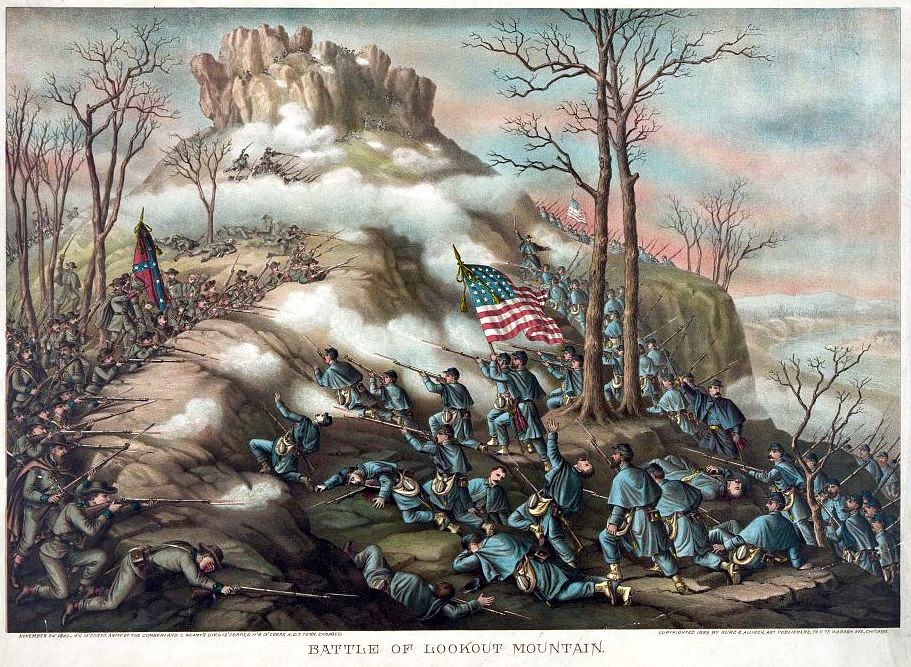 The Battle of Lookout Mountain was fought November 24, 1863, where union forces defeated confederate forces at Chattanooga, TN and “opened the gateway into the Deep South ... casualties were relatively light by the standards of the Civil War: 408 Union, 1,251 Confederate (including 1,064 captured or missing).  Sylvanus Cadwallader, a war reporter accompanying Grant's army, wrote that it was more like a ‘magnificent skirmish’, than a major battle.

General Grant, writing in his memoirs, ‘The battle of Lookout Mountain is one of the romances of the war. There was no such battle and no action even worthy to be called the battle on Lookout Mountain. It is all poetry.’ “(1)    Nevertheless, the action was important in assuring control of the Tennessee River and the railroad into Chattanooga.

After 3 months of service, in January and February of 1864, John B Lewis was listed as on furlough at home in Indiana, then he was present in March, and listed absent sick in a hospital in Cleveland, TN in April 1864.


Then for the next 9 months he was with his regiment and they saw a lot of action: “The Atlanta Campaign was a series of battles fought throughout northwest Georgia and the area around Atlanta during the summer of 1864. Union Maj. Gen. William T. Sherman invaded Georgia from the vicinity of Chattanooga, Tennessee, beginning in May 1864. Atlanta fell on September 2, setting the stage for Sherman's March to the Sea and hastening the end of the war. “(2)


As General Sherman headed east, Maj. Gen. John Schofield's Army of the Ohio with a force of 27,000 troops (including John B Lewis’ regiment), was detached and marched west to Tennessee. There they encountered Lt. Gen. John Bell Hood's confederate Army of Tennessee, at 39,000 men, which constituted the second-largest remaining army of the Confederacy, ranking in strength only after Gen. Robert E. Lee's Army of Northern Virginia.


"From November 24 to 29, Schofield and Hood clashed at the "Battle of Columbia" which was a series of mostly bloodless skirmishes and artillery bombardments while both sides re-gathered their armies.” (3)

Then on November 29th, Hood’s troops head north and outflanked Schofield, splitting his army in two. Hood thought he had trapped Schofield, and took the night off.  Meanwhile, Schofield maneuvered his army in the middle of the night, escaping.  “Both the Union infantry and supply train managed to pass Spring Hill unscathed by dawn on November 30, and soon occupied the town of Franklin 12 miles to the north. Hood was furious!  After an angry conference with his subordinate commanders in which he blamed everyone but himself for the mistakes, Hood ordered his army to resume its pursuit north to Franklin." (3)

What’s interesting about that, is that John B Lewis was captured on that very night; the night when the Union Army sneaks away from the Confederate Army.  I don’t know how that happened, but he was captured and became a prisoner of war. 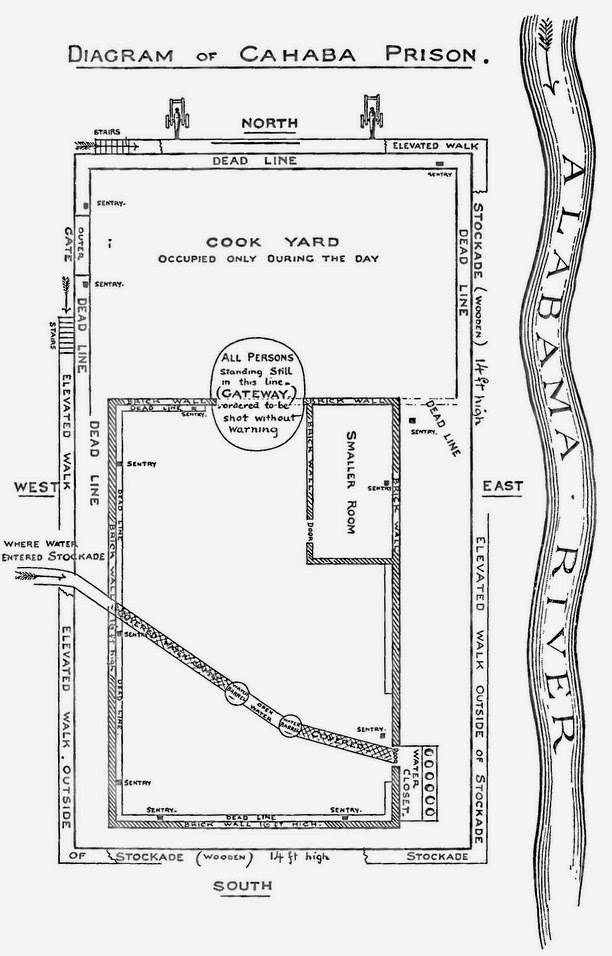 John B  Lewis was sent to Cahaba Prison also known as Castle Morgan, near Selma, Alabama.  “Cahaba was located in a cotton warehouse on the banks of the Alabama River. At its peak in 1864 and 1865, 3,000 men were housed there in with an average living space of only six square feet, by far the most crowded of any prison, north or south. Conditions were harsh, but thanks to a humane prison director and the kindnesses of town people, fewer than 250 soldiers died there.” (4)

After 4½ months at the prison camp, John B Lewis was released because the war had ended.

The soldiers were transported to Jackson MS and then "they had to walk the rest of the way to Vicksburg, which was then about 50 miles on the old road.  Many of the men had no shoes and their feet were bleeding by the time they reached Vicksburg MS.  They were also extremely hungry." (5)

"At Camp Fisk, they were given clean clothes and food, while arrangements were made to transport them north on the Mississippi River.“(5)  On April 10, John B Lewis entered the parole camp hospital near Vicksburg with diarrhea and was returned to duty the next day.


On April 27, the Steamship Sultana arrived.  The Union Army paid the Sultana $5 for each soldier’s transport.  The Sultana “already had about 180 private passengers and crew on board, but by the time more than 2,000 paroled prisoners (and others) boarded, the boat left Vicksburg with about 2,400 people on board – more than six times its capacity. There was standing room only." (5)

"Around 2 a.m., while most of the men were sleeping, the Sultana exploded and caught fire about seven miles upriver from Memphis. The (3 of the 4) boilers that heated water for its steam engines had exploded due to a faulty design and the heavy load of its human cargo.  Some were killed instantly by the explosion. Others awoke to find themselves flying through the air, and did not know what had happened. One minute they were sleeping and the next they found themselves struggling to swim in the very cold Mississippi River. Some passengers burned on the boat. The fortunate ones clung to debris in the river, or to horses and mules that had escaped the boat, hoping to make it to shore, which they could not see because it was dark and the flooded river was at that point almost five miles wide.

Of the approximately 2,400 people on board, about 1,700 died (800 of them from the Cahaba Prison). The Sultana remains the worst maritime disaster in American history — more people died than with the 1912 sinking of the Titanic."(5) 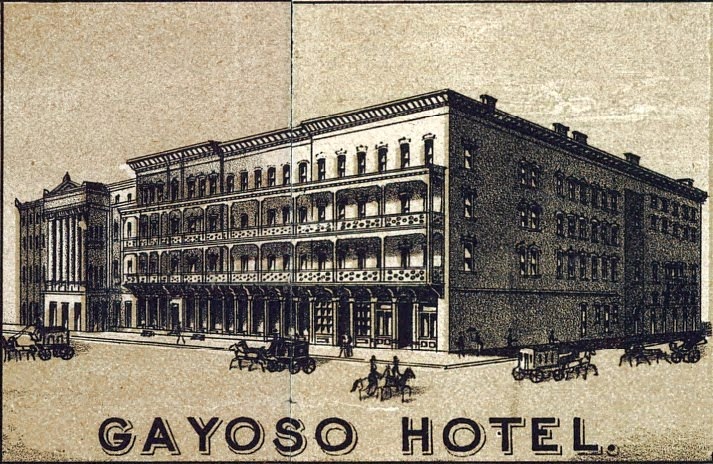 The records state that John B Lewis perished on the Sultana.

But then, the record was amended and said that John survived the Sultana with a slight scald and was treated (for anemia) at the Gayoso Hospital in Memphis. He was returned to duty three days later on April 30.

"Most of the passengers who survived did so by floating on pieces of the boat until they made it to shore or could be rescued. One man survived by floating almost 10 miles on the back of a dead mule. One survivor recalled that there was at least one person clinging to every tree along the flooded banks of the river. All of them were very cold, and some sang songs to try to keep their mind off their troubles. Other survivors mimicked the sounds of birds or frogs." (5)

"In the early morning hours of April 27, 1865, as word of the disaster spread, numerous boats began to assist in the rescue, and the survivors were sent to hospitals in Memphis. Many were naked by the time they were rescued, having shed their clothes to make it easier to swim. In Memphis they were given red long johns (much like thermal long underwear), which some of them wore as they wandered the streets of Memphis." (5)

"When they were well enough, the survivors were put on other boats and sent north, where they finally made it home. The Sultana remained at the bottom of the Mississippi River."(5)

On June 12, 1865, John B Lewis was at home in Logansport, Indiana, but he was sick in bed and could not write.  Charles Lasselle (the same name as the man who recorded the 1860 census) wrote a letter on his behalf asking that his disability furlough be extended.

Even though there was so much information in his service file, mysteries still remain:  about his illnesses, about his service: what did he see in all those battles, about his time as a prisoner of war and his release, about his experience with the explosion.  I wish he had written his memoirs, it would be fascinating reading.

John B Lewis was remarried in about 1870 to Sarah M.  I don’t know what happened to his first wife Mary.

John, wife Sarah and daughter Ida May moved to Iowa and were living there in 1880.  Then John and Sarah moved south over the border into Missouri and are counted in the 1900 and 1910 censuses.