Sidney S Sprague was born 29 April 1806 at Lake Simcoe, Ontario, Canada.  (They were Americans, only briefly in Canada.) His family moved to Ohio when Sidney was 8 years old.

He married Mary in about 1832 in Defiance, OH. They had four children.  Sadly, his only son Frederick drowned in the Maumee River in childhood.  He also had three daughters, Caroline, Mary (who later married John B Lewis) and Adaline.

“Sidney was an attorney and merchant in Defiance, OH where he held several minor town offices.  He was a member of the Ohio House of Representatives, in 1843-44 and  in 1849-1850. In 1851, Sidney was elected Mayor of Defiance, OH.

"In less than three days from the President's call for 75,000 men, this Regiment was ready for the field, being, as believed, the first Regiment accepted by the Government. On the 27 April 1861, and only two weeks after the attack on Fort Sumpter, the 14th Ohio Infantry left Toledo for Camp Taylor, near Cleveland, for completion of organization and thorough drill. On 27 May, it embarked for Parkersburg, Virginia, where it first set foot on Rebel soil, and without opposition."(2)

"On 3 June 1861, one of the first land battles of the Civil War, the Battle of Philippi, took place in Philippi, (West) Virginia.

The battle began when Union troops started lobbing shells into a camp of around 825 surprised Confederate recruits who had been asleep. In response, the Confederates ran, thus earning the battle the name “Philippi Races.” (3)

"The Union Army seizure of important transportation routes made it difficult to supply Confederate units throughout the conflict. The Union presence also ensured the safety of leaders who met in Wheeling to launch a new state—destined to become West Virginia on June 20, 1863." (6)

"The Rebels under General Garnett, began to show themselves on 7 July at Laurel Hill, (the Battle of Laurel Hill—is celebrated annually with a vivid re-enactment).

On 12 July the Rebels suddenly retreated. The Union force moved out, the 14th Ohio in the lead, and took possession of a Rebel fort, and rapidly advanced, in pursuit. So severely were the Rebels pushed, that they left baggage and supplies of every kind on the way; among the fruits of this occasion, were 30 baggage wagons, well-laden, and 250 prisoners taken from the Rebels."(2)

"Heavy rains complicated the rebel retreat, resulting in a wagon train becoming mired in the mud at Corrick's Ford, located east of Philippi.  General Garnett stayed with this regiment and used the wagon train in the mud as a decoy. This planned ambush ultimately failed."(3)


"On page 481 we publish an illustration of the battle in which the late General Garnett, of the Rebel army, lost his life. He had evacuated his camp at Laurel Hill during the night of (July) 11th. General Morris's column commenced the pursuit the next afternoon. After a terrible forced march through rain and mud, over Laurel Mountain, our advance came upon the enemy at Carrick's Ford. 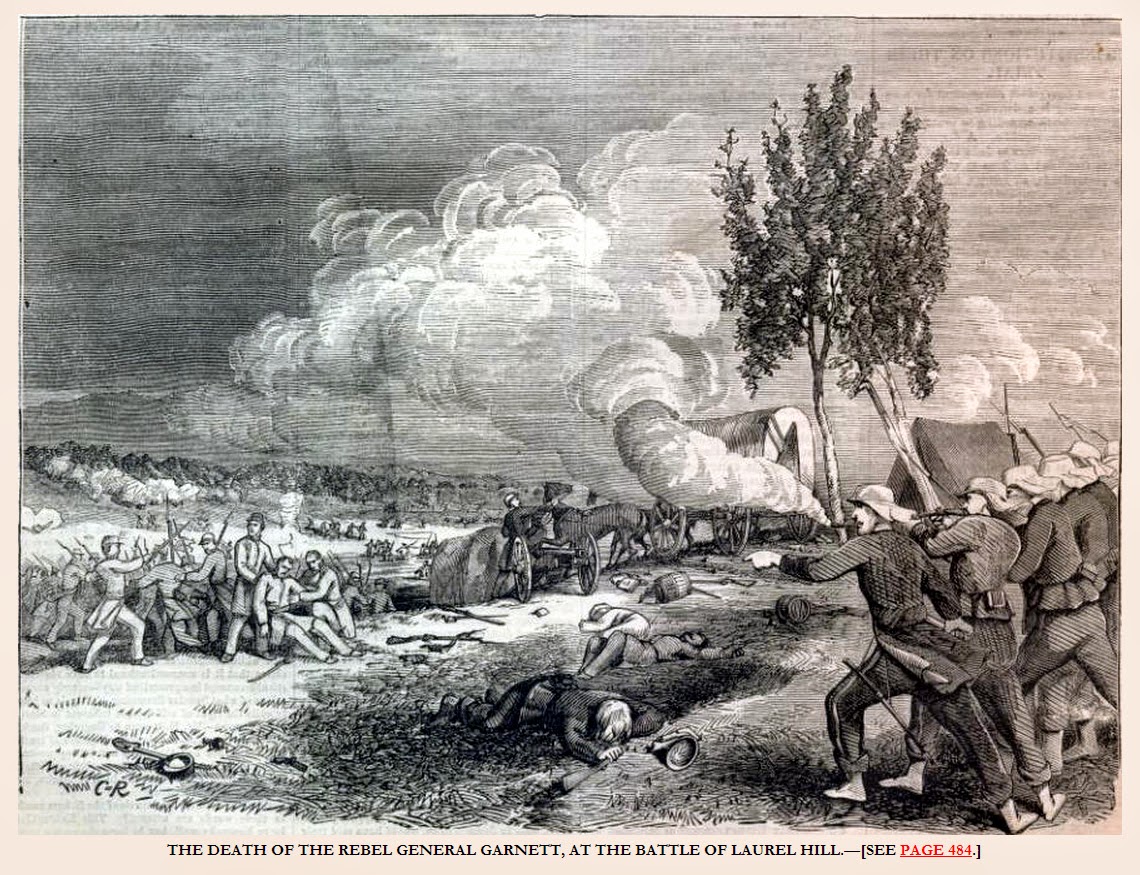 The rebels drew up in line of battle, and poured in a raking volley on the right of our column—the Ohio Fourteenth—which returned a hot fire, lasting twenty minutes, when Colonel Dumont's Indiana Seventh made a charge upon their battery. They broke and ran, crossing the Ford toward St. George.  General Robert S. Garnett, while attempting to rally his flying men, was struck by a ball which passed through his spine and out at the right breast. He fell dead on the sand."(4)  He was the first General killed in the Civil War.

"At Laurel Hill, the 14th Ohio remained in camp until 22 July, when its term of enlistment having expired, it returned to Ohio. On the way, it was the object of much attention, including many expressions of kindness. The Regiment was received with every manifestation of pride and joy."(2)

Sidney mustered out of Company D, 14th Ohio Infantry on 13 Aug 1861 at Toledo, OH.  All 87 members of the company returned home.  Only one had been wounded on 13 July at Carrick's Ford.

It's very likely that Sidney reenlisted and served as Captain in Company B of  the 68th Ohio Infantry.  We would need his service file from the National Archives to find out more about that service.  That unit 'mustered in' in December 1861 and mustered out on July 10, 1865.  However, it appears that Sidney returned home from the war (don't know the reason) and he died 24 June 1864 in Defiance, OH.

The citizens of Defiance erected a beautiful monument in honor of his distinguished service as a soldier.“ (1) 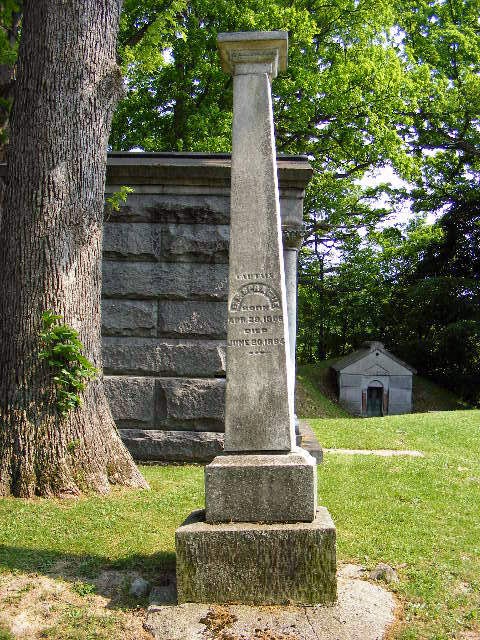