"William and  Magdalena Hamilton lived on what is known as the "Hankey farm,"  three miles west of Gettysburg, the title to which he purchased from the heirs of William Penn; the old homestead  was standing at the time of the Civil War battle, and was used by the  Confederates as a hospital." 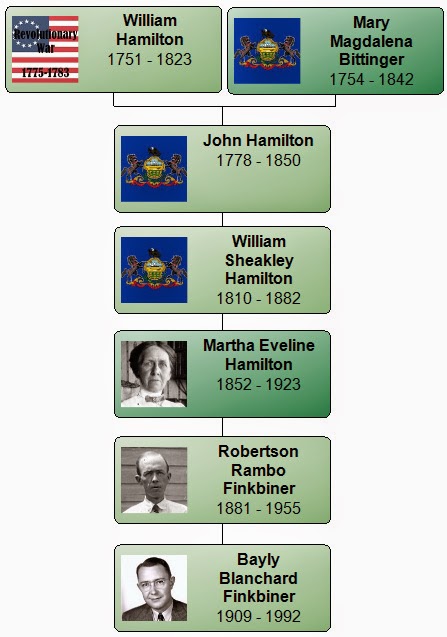 William served in the army and served as a lieutenant under Capt. Robert McConaughy, he thinks he was out two tours in that capacity but does not know the length of the tours.  It was about the commencement of the war that he heard his father speak of returning home from the war to see his family in the fall of 1776, and his oldest child Margaret was then born, and he stayed at home with his family some days and then returned to the service.

He heard his father speak of carrying some money from his mother-in-law to his father-in-law Capt Bittinger who was at that time a prisoner of the enemy.

He heard his father speak of a soldier being shot down by his side in a skirmish at Amity, he has also heard him speak of retreating from the enemy at the battle of Brandywine.  Upon one occasion, being upon a scouting party his father observed the enemy in the act of firing upon him but he fired a moment before the enemy, who fell, his ball passing close by his father’s head.


He was a matross (a gunner or a gunner's mate; one of the soldiers in a train of artillery, who assisted the gunners in loading, firing, and sponging the guns.)  in the company and he thinks he entered this service about the spring of 1779.   He cannot tell how long he was in service but thinks it was a considerable length of time until the close of the war or nearly so.  –Jesse Hamilton, 1855


After the war, William was one of the commissioners appointed to supervise the erection of the first county building at Gettysburg, when Adams  County was formed.