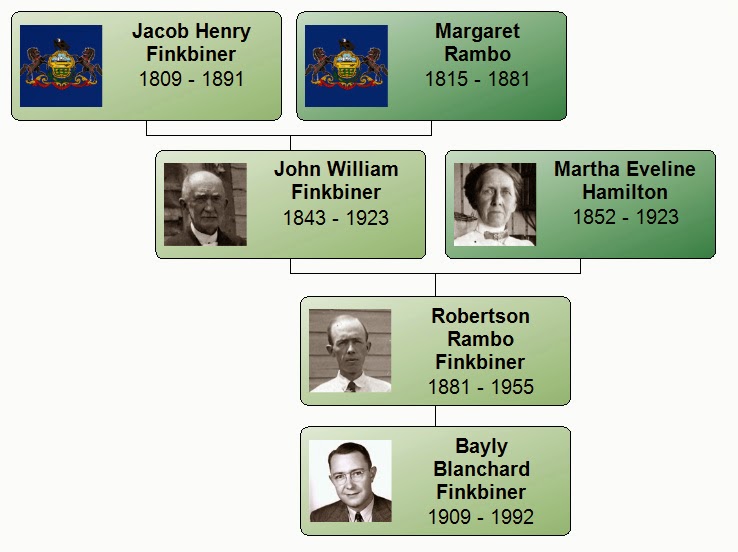 In 1880, John William was a minister in Middletown, PA, and he is enumerated along with his wife Martha and two kids: Hellen (3) Hamilton (8 months)

In about 1894, the family came to Colorado Springs, Colorado. Martha E. Hamilton Finkbiner lungs needed a higher climate, so the family moved from Maryland. The children were: oldest son, Bayly, then Robertson, then Nilson. Their father, Rev. John Wm. Finkbiner was a Lutheran Minister in Cumberland, Maryland at the time and became Minister of the Lutheran Church at Colorado Springs.      --Letter was written by Gertrude B Finkbiner, Fall of 1963

The census of 9 June 1900, in Colorado Springs, shows them renting a home at 309 E Platte Ave, and lists the children:


Martha said that she is the mother of 6 children, only 3 living.  One of them must have been little Hellen who was enumerated in the 1880 census.  We don’t know who the other two may have been.


The census of 1910 and 1920, in Colorado Springs, shows them owning their home at 315 E Platte Ave.  Today on Google Earth, there is a church there, but it doesn't look that old.

From a story printed in The Gettysburg Times (Gettysburg, Pennsylvania), 15 March 1923:

DIED IN THE WEST

Sister of John B. Hamilton, Gettysburg, Passed Away
John B. Hamilton, of North Washington Street, has just received word of the death of his sister, Mrs. Martha Hamilton Finkbiner, of Cheyenne, Wyoming. She was born in Butler Township, this county, the daughter of William S. and Eveline Hamilton.

She is survived by her husband, the Rev. J.W. Finkbiner, and three sons, Nilson, of Salem, Oregon; Bayly of Cheyenne; and Robertson, of Medicine Bow, Wyoming. A sister, Mrs. Jerry Hummer, of Mummasburg, and a brother, John B. Hamilton, of Gettysburg, also survive. Burial was at Cheyenne.