Valentine Keeley's name was written as "Felde Kille" on one version of the passenger list, and "Valtin Kuhle" on the other.

After arrival in America, his name was spelled many different ways in various records. The original German spelling is uncertain.

*the ship sailed from Rotterdam, Holland, but that's not where the Keeleys were from. During that time period, thousands of German-speaking "Palatines" were leaving Europe as refugees...most floated down the Rhine in small boats, arriving in Rotterdam, where they boarded ships to England and America.

Queen Anne of Great Britain took pity on the Palatine refugees and settled many of them in Ireland, others in America. They were indebted to the Queen and promised to repay her later, some by making tar and pitch from the pine forests of America for the British navy.

Valentine Keeley (37) his wife Susannah (29) and their children Valentine (12) and Matthias (6) made the voyage. 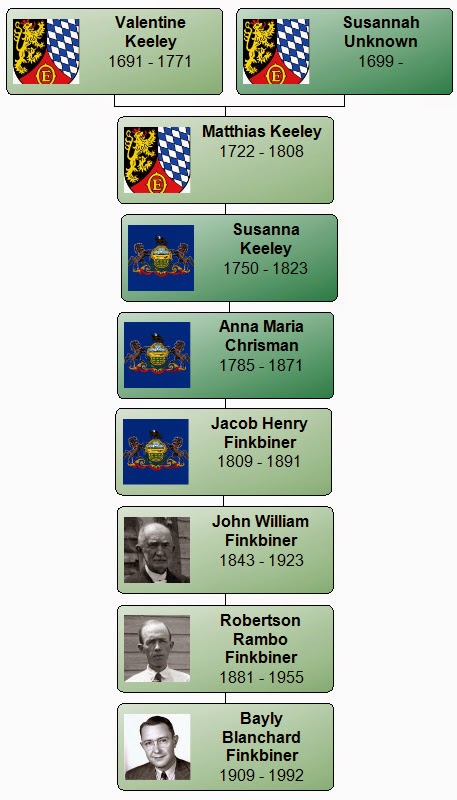 Their oldest two children had been born in Germany:


The family settled in rural Philadelphia County, PA, northwest of Philadelphia, where Valentine built up a nice farm in the Schwenksville area. They had three more children:


Valentine Keeley was naturalized in the Supreme Court at Philadelphia, in September of 1740.  (and the entire family would have been naturalized at the same time as the Head of Household)

"General George Washington and the Continental Army camped in and around Schwenksville – September 26 to 29 and October 4 to 8, 1777 – prior to and immediately following the October 4 Battle of Germantown. Washington's headquarters probably was at the (Valentine's youngest son) Henry Keeley House, just southwest of the town that he called "Pawling's Mill." The bulk of the Army camped on the opposite side of the Perkiomen Creek, at Pennypacker Mills." (2)

The events preceding the encampment here had been disastrous for Washington. He had been defeated at Brandywine, September 11, 1777, and retreated from there to Pottsgrove while the British crossed the Schuylkill River below Valley Forge and proceeded to Philadelphia.

After the Battle of Germantown on October 3, 1777, which ended in defeat for the American forces, Washington returned to this area with his wounded, many of whom were dropped along the way to be cared for by farm families.

Other wounded were housed at Pennypacker's Mill, while it is reported still others were carried by the way of Frog Hollow to Keeley's School/Church, where a hospital had been set up. About 250 soldiers who died here are buried in the Keeley (Schwenksville) Cemetery. 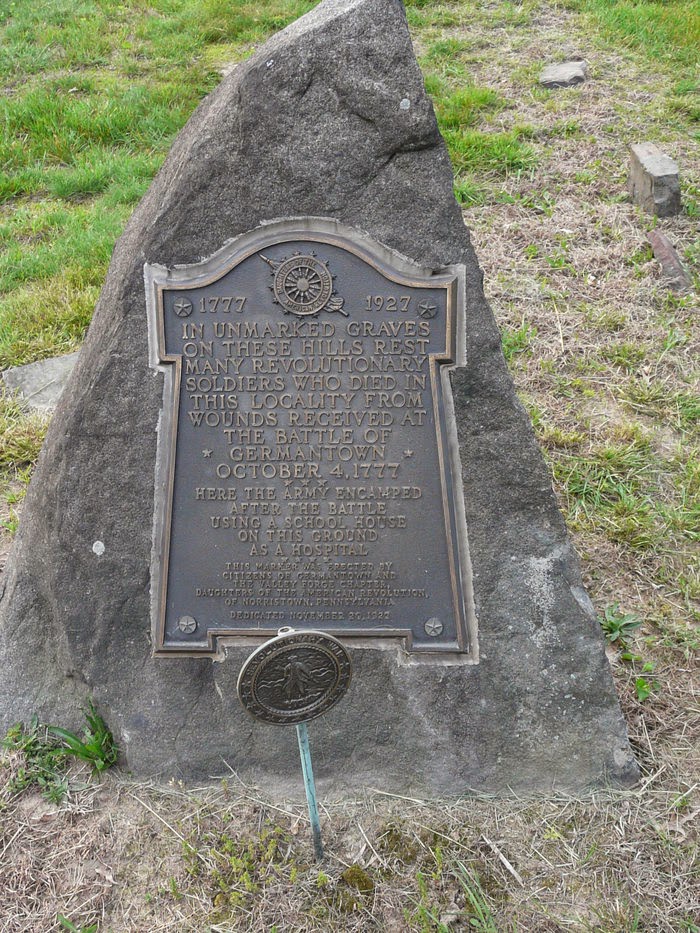 Valley Forge, where Washington's army encamped during the winter of 1777-1778, is located about 10 miles to the south, on both banks of the Schuylkill River." (1)