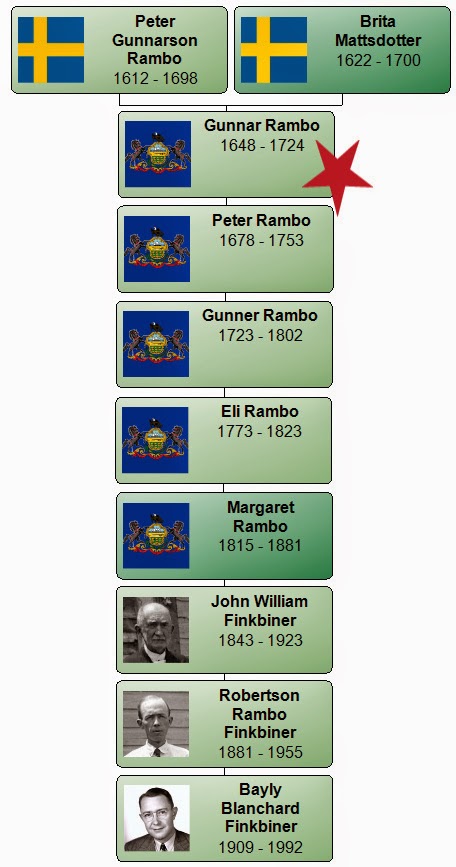 Anneka was born about 1652, a daughter of Peter Larsson Cock and Margaret (Lom) Cock and a sister of Maria and Brigitta Cock who married Gunnar's younger brothers Anders and John.

Gunnar Rambo was a large land owner and occupied a prominent place in the affairs of the province.

The 1697-98 roll of the Swedes on the Delaware prepared by Andreas Rudman, pastor of the Gloria Dei Church, listed eight of the nine of Gunnar’s and Anna’s children in the family and their ages:

He was on his land before 1682 because the Swedes had bought this Pennsylvania land from the Duke of York before Penn ever owned it.  Gunnar Rambo states that he stood at Upland [now Chester, PA] and watched Penn sail up the Delaware in 1682 ... implying that he was on his land at Matsunk above the falls of the Schuylkill (SKOO-kil) River.


"They chose excellent land.  While southeastern Pennsylvania in general was very good for agriculture, the Swedes' tract lay on probably the finest of the region.  A rolling terrain, it had a deep, well-drained loamy soil, free of loose stones and enriched by limestone deposits.  It lay athwart a limestone belt about a mile wide extending east to west until it widened into the soon-to-be fabulously productive Lancaster Plain.  Several streams arose in or ran through the area, such as Matsunk Creek and Frog Run, although none of them was strong enough to propel a mill.  Amply wooded, with oaks, hickories, and poplars predominating, by with open grasslands as well, the area abounded with wildlife -- deer, turkeys, bears, wolves, foxes, squirrels, and an occasional panther.  The woods supplied material for rafts and canoes and for log cabins.  The limestone which ranged from hard marble to soft stone, not only fertilized the soil but also provided stone for chimneys and ovens and for building more substantial structures.  The Schuylkill River, which enhanced the soil and supplied shad and catfish for the table, was not deep enough for large vessels except during the spring flooding, but rafts and canoes could be used for carrying the settlers and goods to and from the City.  Because of Penn's prior treaty arrangements the few Indians in the area were friendly." 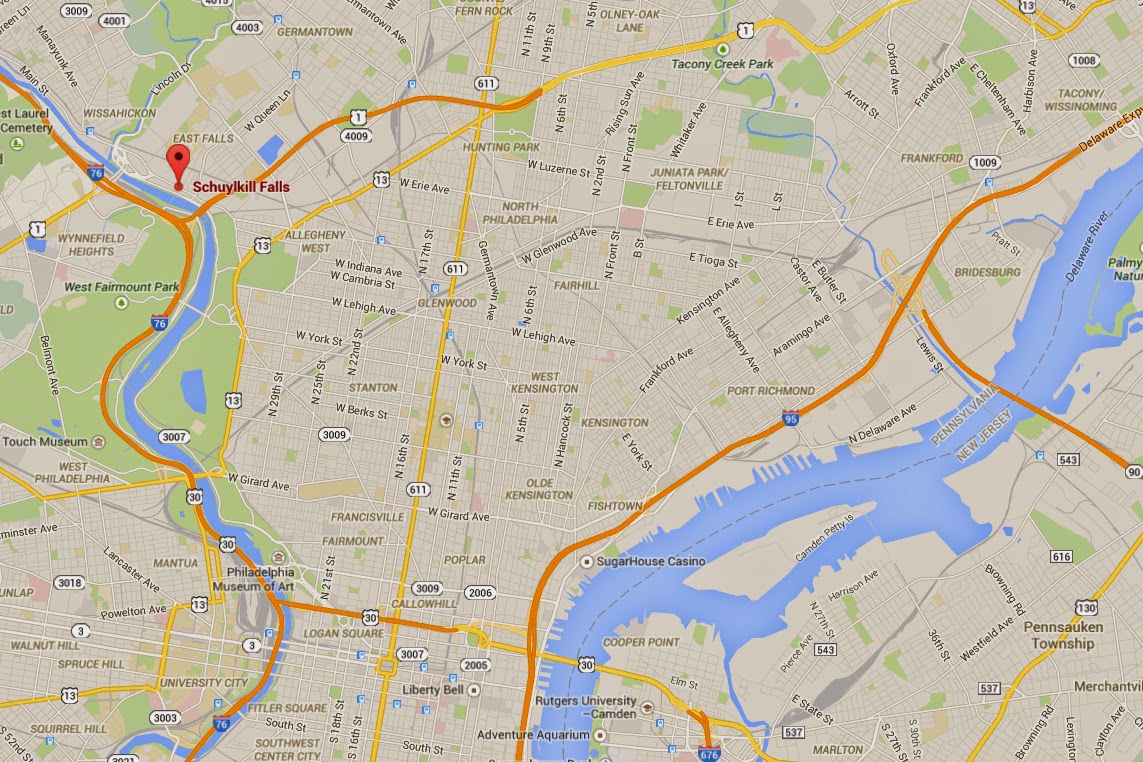 Gunnar and his family belonged to Gloria Dei church at Wicaco, and in 1684 he and his brother Peter Jr. made a voluntary contribution of 30 guilders for the support of Rev. Jacob Fabritius. The Upper Merion Swedish Lutheran Church was meeting in Gunnar's house earlier than 1712.

"In the Name of God Amen, I Gunner Rambo of Matson in the County of Philada finding myself weak of body but of perfect and sound memory Blessed be God for it, do make this my last will and testament, revoking all former wills ever heretofore made by me or for me this fourth day of January one thousand seven hundred and twenty three/four.  Imprimis I give and bequeath my soul into the hands of Almighty God my Creator and my body to be buryed in a christian and a decent manner as my Executor hereafter named shall think fitt.

ITEM I Give unto my Eldest Son John Rambo (age 50), the sum of five shillings, which, with what I have heretofore Given him, shall be in full of all demands and his share or portion of this my Estate.

THEN I give unto my son (second) Peter Rambo (age 45), the Bed and Bolster, that I now lye on, with what he has had before shall be in full of all demands, for his share or portion of this my Estate.
(third son Gunnar, and his 7th son Matthias were already dead)

THEN I give unto my (fifth) son Mounce Rambo (age 39) the sum of five shillings which with, what he had before shall be in full of all demands for his share or portion of this my Estate.

THEN I give unto my (sixth) son Gabriel Rambo [#17], the sum of five shillings which with what I gave him before shall be in full demands of his share or portion of this my Estate.

THEN I give unto my Granddaughter (his daughter Brigitta’s child) Katherin Holston (age 18) the sum of five shillings which is likewise in full of all demands from this my Estate.

(youngest son) Ellias Rambo (age 30) to pay upon the 26th day of March, yearly after my decease the sum of five pounds p annum, of Current Lawfull money of ye province of pensilvania for eight years until the whole sum of forty pounds be paid, and in the mean time that he shall give Andrew security for the payment of the several sums yearly which is likewise in full of all further Demands from the sd Andrew to this my Estate.

Testament witness my hand and seal the day and date first above written.  Gunnar Rambo (his mark Sealed and Delivered in the presence of us,  Edward Farmer, Joseph Gray, Peter Yokom (his mark), Lovell Jarpson [Jackson]

Gunnar Rambo died in Upper Merion Township in January 1724 at the age of 75.  His wife predeceased him." (1)